An added treat, Bill shares selections from his collection of architecture books that include climate data tables and diagrams, which were generated by National Oceanic and Atmospheric Administration (NOAA). Stemming from energy conscious efforts in the 1970s, experts at NOAA's Asheville office, now known as the National Centers for Environmental Information, constructed data products for use by the architecture sector nationwide. This session of Speaking of Climate appeals to a broad audience, climate scientists, climate service providers and practitioners, and energy-conscience disciplinarians.

CASE Consultants International is pleased to provide this session free and open it to the public . We encourage you to register to secure your seat by clicking purchase ticket. 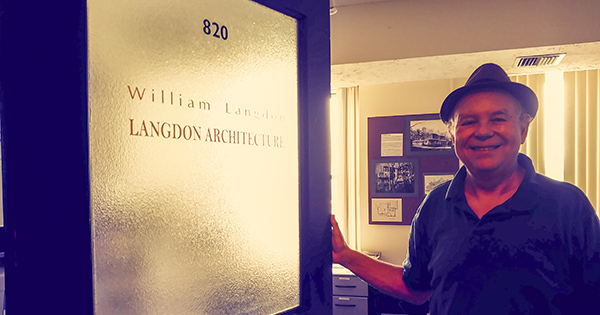 Born and raised near Detroit in southeastern Michigan, Mr. Langdon received his Master's Degree in Architecture from the University of Michigan in August of 1973. Moving to Asheville, North Carolina in 1974, he began his architectural internship with several Asheville area firms.   As a graduate assistant at the University of Michigan, his primary area of study was design based on climate, energy, cultural regionalism, and historic built-form.  He continued to work and write in this regard during his internship, writing for the "Alternative Sources of Energy Newsletter" and then authoring a portion of the book, Low-Cost Energy-Efficient Shelter.  Mr. Langdon also taught sustainable design courses at Asheville-Buncombe Technical College in 1974, and at Warren Wilson College in 1976.   Mr. Langdon opened his own firm in 1978 with a series of passive solar projects underway.  In 1978 with an advance to write his own book on windows and energy, his teaching and sustainable design research was stretching coast-to-coast across the climates and regions of the entire country. In summer of 1978 he taught  "Energy-Efficient Shelter" and "Solar Design" at Goddard College in Vermont.   In the fall, he was asked by HUD to help write and edit a book on award-winning designs, The First Passive Solar Home Awards Book, heading a team of some of the best sustainable design architects of the day.  In 1979 Mr. Langdon completed his own book, Movable Insulation, published by Rodale Press in 1980. During 1983 and 1984 Mr. Langdon was a Visiting Assistant Professor of Architecture at the University of Arkansas, where he jointly taught studio with the world renown, E. Fay Jones, FAIA and AIA gold medalist.  He also was very active with the Passive Systems Division of ASES, serving as secretary of their board, and in the review and selection of technical papers for solar conferences. Mr. Langdon returned to private practice in Asheville in 1985.  During the late 80's he designed another generation of passive solar homes, as well as a growing portfolio of commercial and residential projects.  By the early 1990's his work was mostly in commercial projects, along with some significant public commissions such as the award winning William Mull Building, the Administrative and Engineering Facility for MSD of Buncombe County.  (Courtesy of Wm Langdon Architecture PA.)

CASE Consultants International applies Climate Arts and Sciences Expertise to inform real-world decisions in climate adaptation, sustainability, and resilience. We mainstream climate science into the practices of climate-sensitive professions. CASE connects science to solutions, informing decisions in a warming world. AIA Asheville leads the way as architects design for a warmer world.
0
It appears your browser has blocked or disabled cookies. In order to order tickets you must enable cookies. Click here  to see how to enable cookies.